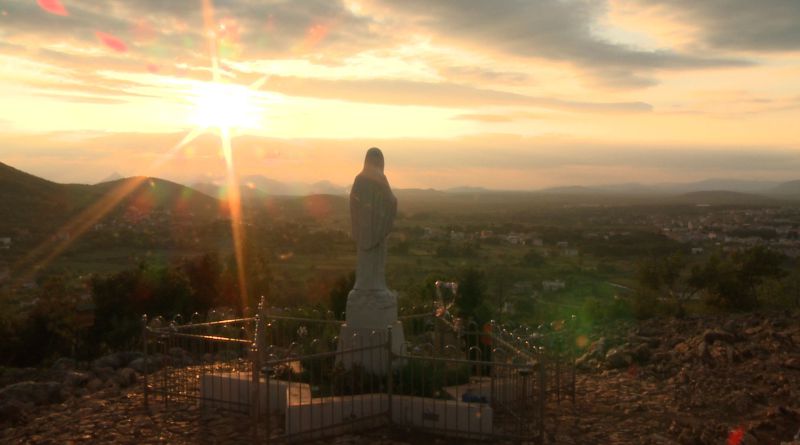 I was in bed with my girlfriend, smoking pot, watching TV. I taught scuba diving in the summers in Hawaii, and skied in the Swiss Alps all winter. I was independently wealthy living the life of a playboy.
-Jose, Spain

My world was science being an MD, and I married an MD. Science was my life with no faith. I had everything I wanted in life with a home over the Pacific Ocean and three young boys. I lost a child at nine months due to a genetic disorder and was helpless to do anything. My girl died in my arms. Pregnant again, and had a miscarriage. Pregnant again, and had another child die at 21 months due to the same genetic disorder.
-Cyndi, California, author of Waiting For a Miracle

This was what I heard my first 24 hours in Medjugorje, Bosnia. If I wrote about the rest of the week and the stories I heard when I was there, it could fill a book.

Every person has a story. In Medjugorje, Jose felt a blanket of love come over him so great he knew it was God, and then he changed his life. He knew instinctively his lifestyle was wrong, but it was the love of the Blessed Mother that drew him to Medjugorje. When I met him in early November, he had driven from Madrid, Spain to spend a month in Medjugorje to grow spiritually. He felt drawn to Medjugorje like a magnet.

Patrick sold cars in Canada and read a line in a book on messages from Medjugorje that said, “This is your last chance to convert.” He knew after a lifetime of serious sin that this applied to him. His life was radically changed. He sold his business and moved to Medjugorje and says with humor, “I wanted to be the Blessed Mother’s neighbor.”

Cyndi, as many successful people, was in charge of her own destiny, or so she thought. Having achieved the American Dream of a beautiful family, material and job success, and now with a sick child she found herself no longer in charge. She then found out about Medjugorje, and found her faith and meaning in life. Her first trip was in 2001 as she sought a healing for her baby with Father Jozo. In the next few months and ensuing years, she found something few do—faith to face life’s obstacles and challenges for peace of soul.

By design, I went alone to Medjugorje to truly understand and absorb the spirituality of what is happening there. On other trips I had made there since 1990, there were always people around, and the excitement of new relationships and the dinners out at the Dubrovnik and Columbo’s restaurants drowned out what I wanted to hear. In the noise, the Holy Spirit was not heard as well as I would have liked. So, I showed up on my own, and took a room in early November 2016 for a week. The crowds of the summer were gone. However, seeing Mirjana’s apparition on the second of the month was a first for me, and contemplating her in another dimension was inspiring.

medjugorje_crossI had many thoughts on Medjugorje, and have more now. I looked, I heard, and I wandered frequently alone. I walked everywhere and walked a lot–miles every day observing. I saw the water oozing from the leg of the Cross of the Risen Christ. I saw the past suffering of the “Iron Curtain” Church as I read its history with 66 Franciscans killed in World War 11, and 16 dead in the 1991 to 1995 war. I saw the exponential growth of Islam in Sarajevo and Mostar. I learned how Medjugorje grew so fast in the early years with the visionaries in so many different high schools. I saw restaurant menus in 14 languages at Viktor’s restaurant. I saw thirty-two Croatian confessionals, and twenty-seven in many other languages of the world with people twenty deep waiting for hours.

I spent five hours with the unofficial town historian and archivist who grew up directly next door to Marija Pavlovic’-Lunetti, and is still a close friend of all the visionaries. I always wondered about the total count of visitors, and she admitted no one really knows. She did provide an interesting piece of data that explains Medjugorje even as a bigger light to the world. Since the beginning of the apparitions, St. James Church has distributed sixty million hosts at Masses! Churches and dioceses keep count of those numbers. This would account for all of the Croatian and Bosnian pilgrims who do daily round trips from nearby cities and towns, as well as parishioners who come to Mass there daily or weekly. If one accounts for the fact that few knew of and journeyed to Medjugorje until the mid to late 1980’s, and the war in the early 1990’s, it is a stretch to reach 35 million out of country pilgrims as many say.

In my opinion, Medjugorje is the most important apparition in world history, and clearly builds on the message of Fatima. According to messages received, it is the last apparition to the world. The Blessed Mother said very early, “I have a plan for the salvation of mankind.” It is the fulfillment and completion, and (as Mirjana says), “the fusion” of Fatima with Medjugorje. The attempted assassination attempt on Pope John Paul II was May 13, 1981. The Blessed Mother appeared on June 25, 1981 while the Pope was still in the hospital.

While there, I could not help but think of the poem by Emma Lazarus called The New Colossus inscribed on the pedestal of the Statue of Liberty in New York that says,

“…A mighty woman with a torch, whose flame is the imprisoned lightening, and her name the Mother of Exiles. From her beacon-hand glows world wide welcome: her mild eyes command the air bridged harbor that twin cities frame… With silent lips, give me your tired, your poor, your huddled masses yearning to breathe free, the wretched refuse of your teeming shore. Send these, the homeless, tempest-tost to me…”

A priest said about Medjugorje long ago that it was “the world’s garbage dump.” It is a place of unheralded grace where people unburden their sorrow, their guilt, and their sins like nowhere else on earth. Saint John Paul II called it, “the world’s confessional.”

Medjugorje is principally about one thing: grace–freely given, and freely chosen. A place where people journey; some who are daily communicants searching for more from God, and those who are the lost sheep. A place where the shepherd leaves the ninety-nine sheep to find the one that is lost. In essence, the entire spectrum of the Body of Christ converging to know more of God and asking for graces to overcome the obstacles that confronts them. A place of redemption to start again with a clean slate and do as God asks. The Divine Mercy of rescuing someone who is lost. The Good Shepherd loves his flock and they hear His voice.

Everyone has a story and they are drawn and invited there by grace and the love of the Queen of Peace—The Blessed Mother–The Advocate of God. Since 1981, the Blessed Mother has been appearing there to six individuals, all past middle age now. Some appearances are still daily, while others less frequent, and others on special occasions. Ivanka, one of the visionaries, has said that she has been told the future of the world, as well as the future and problems of the Catholic Church in particular. It is unlike any apparition in world history.

The visionaries are living joyful and peaceful lives producing fruit on a daily basis. As Jesus said to His apostles in the midst of a storm, “Fear not, it is I.”

Heaven has a plan.