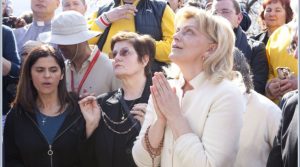 Today we are talking about the 3rd secret of Medjugorje. It will be a great sign, which will convert many…

This is a special message given to the visionaries on September 13, 1984. Of course there is still so much sin in the world even today:

Dear children! I still need your prayers. You wonder why all these prayers? Look around you, dear children, and you will see how greatly sin has dominated the world. Pray, therefore, that Jesus conquers. Thank you for having responded to my call.

The earth has never seen anything like it. It will appear suddenly, as if from nothing, or directly from the sky itself. It will come in such a way that people will have no terms to describe it. It will appear on the ground, can be seen and photographed, but can not be touched. Already today a webcam is constantly resuming the point where it will appear.

According to the visionaries, one day a permanent sign will appear on the site of the first apparition. Beautiful and indestructible, the sign will lead to many conversions. According to Marija, there will also be healing.

But first of all it will make many more people believe.

“Of course, it will be clear to everyone that it is not something built and assembled. No one will be able to say that it was brought and placed in that particular place by, say, someone from Medjugorje, “Mirjana told the Catholic author-journalist Michael H. Brown in 2002.

Medjugorje: Enormous Grace and the Possibility of Believing

The Permanent Sign is the third secret known by the visionaries of Medjugorje. It is the only secret known to all the seers.

At least four of them also know when the sign will appear.

The Permanent Sign is destined to change more hearts because it has been preceded by the first two secrets. And according to the visionaries, changing hearts is all that the sign will concern.

More than anything, they say, the sign will be given to those who do not believe: “The third secret concerns the sign that Our Lady will leave here, on the mountain of apparitions. This sign will remain forever. It will be given above all for those people who are still far from God. Our Lady wants to give these people who will see the sign another chance to believe in God, “Vicka told Radio Maria in January 2008.

“They will perceive the sign as a place where they can convert. They will go to the mountain to pray and they will be forgiven, “Mirjana prophesied in 1983.

“When the permanent sign comes, people will come here from all over the world in even greater numbers. Many others will believe, “Jakov said.

A Test for the Hearts

However, according to the visionaries, there will also be people who will see the sign and still will not believe it, or who will not receive the impulse to convert that many other people will receive by seeing it:

“I want to tell those people who will see and do not believe that Our Lady leaves everyone free to believe or not, but these are those whose hearts are too closed. It is the same thing that Our Lady told us:

25 years earlier, during his interviews with Fr. Janko Bubalo, a younger and somewhat less diplomatic Vicka had said so much on the sign, albeit more immediately:

P. Janko: “Do you know exactly what the sign will be?”

P. Janko: “Do you know when the Virgin will make it more evident to us than others?”

P. Janko: “And why is the Virgin leaving her mark here?”

Vicka: “To show people that you are here among us … I will limit myself to saying this: those who do not believe without a sign will not even believe with a sign. And I also tell you this: woe to those who delay their conversion, awaiting the sign. I once told you that many would come, and perhaps even kneel before the sign, but still they will not believe. Be happy not to be among them! “

In saying so, however, at the end of 1983, Vicka had simply paraphrased a message that the Virgin Mary had given the same year in spring:

All the secrets I have confided will be realized and even the visible sign will manifest itself, but do not wait for this sign to satisfy your curiosity. This, before the visible sign, is a time of grace for believers. Therefore, convert and deepen your faith! When the visible sign comes, for many it will already be too late. (December 23, 1982)