What does Our Lady say on the abortion issue? What do you feel? Do women confide in you about this issue? 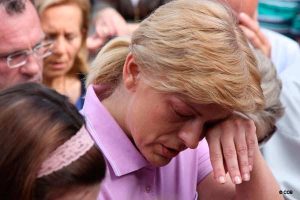 Mirjana: I wouldn’t like to judge anyone; never. Why a woman had an abortion and what life experience she was going through at that time, only she knows. Generally, I don’t like judgments. I don’t like judging anyone, because I don’t know what goes through the mind of a person and why he has done something. When I was in Sarajevo and went to the high school that I talked to you about, which gathered all those who had been expelled from other schools, many girls had an abortion very easily. Then they came to school in the afternoon and spoke, and were at the concert which was held in the evening. To me it was unthinkable! I was very sad about that situation. I cannot say that I was totally shocked, but to a certain extent I was, because I couldn’t understand that a woman could kill an innocent child within herself, speak calmly and then go a concert in the evening.

Once I plucked up my courage and, during an apparition, I asked Our Lady why these children could not go to Heaven; why they had to suffer and be killed if they were innocent. They hadn’t chosen it. I said all sorts of things. Then Our Lady said to me maternally and seriously: “No, these children are with me. There is no limbo. They are with me. Their parents will have to account for their sin of abortion.” That’s what Our Lady told me. Here in Medjugorje, I had the opportunity to meet women who had an abortion and the majority of them – I’d say 95 percent of them – repented. They regretted what they did. It is a sincere regret which really comes from their heart. These women are broken. I always recommend that they be honest in their confession, go to a priest, kneel down before God and express their regret. I think that afterwards they all feel better or at least that is what they have told me.

Certain women say it’s their body, so they have a right to decide whatever they want about it.

Mirjana: I don’t agree with that. Of course I wouldn’t say I’m right. This is just how I see, but I disagree. If another life grows in my body, I can not say that that’s my body and that I have a right to decide whatever I want about it. It’s someone else’s life. God created a new man or a new woman. You cannot decide that the child will not live. God created it in your body, but not for you to represent God and decide whether it will live or not.

Do you think God forgives such a sin?

Mirjana: I cannot say whether or not God will forgive it; only God knows. However, we know that Jesus said that what the priest forgives us, will be forgiven. I believe in what He says. Seeing God as a Father, as our Heavenly Father, if you present yourself before Him kneeling and crying from your heart for the sin that you have committed and the remorse you feel, I don’t think that a priest will turn his back on you. I don’t think so.

When Mirjana Had the Courage to Ask The Blessed Mother about Abortion.